IRA ROLLOVERS ARE BACK FOR GOOD 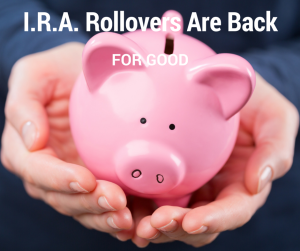 It only took Congress 9 years to get it right.

After being first offered for the 2006 and 2007 tax years, the I.R.A. Charitable Rollover has been made permanent. This is much better news than in December 2014 when Congress extended the giving incentive for a less than generous 14 days.

On December 18, 2015, the President signed the Consolidated Appropriations Act, 2016 (H.R. 2029) which included the Protecting Americans from Tax Hikes Act of 2015 (PATH Act). The PATH Act made I.R.A. Rollovers to Charity available for the remainder of 2015 but also extended this planning opportunity indefinitely.

Here’s what you need to know:

Just as in the past, the benefit to the donor is that the amount directly transferred to charity is not recognized as taxable income to the donor. The rollover also counts against the donor’s required minimum distribution from their traditional I.R.A. The donor does not receive a charitable income tax deduction for the rollover.

If you’re a donor and meet the qualifications above, consider using an IRA rollover gift each year to reduce your taxable income.

If you’re a development professional make sure to educate your more senior donors when you’re visiting with them about the benefit s and ease of IRA rollover gifts. This gives you an opportunity to serve them without an urgent ask. Also, make sure you include IRA rollovers when marketing gift opportunities throughout the year. If you don’t know where to start, we’re here to help!

RT @StevenScreen The best-performing direct response fundraising is written and designed to tap into how the donor works, not to share how your organization works.

Sure seems that way. twitter.com/thejordanrache…